8 Facts Publishers Should Know about Apple News Plus

Apple launched its new subscription service called “Apple News Plus” in March 2019 in the US and Canada. And you probably know that the company plans to launch this service in the UK and Australia in autumn 2019.

As is often the case with Apple announcements the reactions after the launch ranged from “a disappointment” to “the antidote to Facebook’s garbage.”

Many publishers are very uncertain about this topic. That’s why I want to bring some clarity.

What does Apple News Plus offer readers and publishers? Does it make sense for publishers to participate? In this article I will give you an overview of the most important facts about Apple News Plus.

A quick overview of what to expect in this blog:

1. How many subscribers does Apples News Plus have?

First of all let me quickly clarify what Apple News Plus is: It is a paid extension of Apple News and curates all the news content from across the web in a handy iOS interface. This paid subscription also brings in magazine articles that normally would be behind paywalls.

According to Apple its new service, Apple News Plus, attracted 200,000 subscribers within 48 hours of its launch. Tim Cook, CEO of Apple, mentioned that the free of charge Apple News Service has 85 million monthly active users.

Apple News claims to be the #1 news app in the world. Also, each month, over 5 billion articles are read in Apple News. Because of these numbers it is relevant for publishers to thoroughly evaluate this new publishing channel.

2. How much is Apple News Plus?

For Apple, investing in this subscription service makes complete sense, because its iPhone business declines.

Whereas its subscription services such as the app store, Apple Music and Apple Care rise. Revenue for these services rose 19% to a record $10.9 billion. So, I think it’s only fair to ask: How could Apple achieve that? Where could the “new” money come from?

Apple News Plus operates on the Spotify/Netflix model: Once readers are in they have access to everything.

In the US, the subscription price is $9.99 a month, after a free one-month trial. Family sharing is also available at no extra charge for up to six family members.

In Apple’s own words: Apple News Plus provides access to content that would separately amount to a cost of over $8,000 per year.

Apple takes a 50% cut of all subscription revenue leaving publishers to split the rest based on how many people read their stories. For many publishers this is one major concern, because they usually make way more money with their own subscription model.

3. Which publishers already participate in Apple News Plus?

Renowned publications are in

In the US there are over 300 magazines included in Apple News Plus, across a number of categories, including lifestyle, entertainment, news and more.  Apple has made deals with most of the major magazine publishers like Conde Nast, Hearst, Time Inc. and Meredith.

Renowned publications such as Vogue, National Geographic Magazine, The New Yorker and The Wall Street Journal have all come on board as well.

Here’s a selection of participating titles:

You can find the full list here or here. That looks great, right?

Still, you might have noticed that some big players are missing. Let’s find out who is missing and why.

Just as with iTunes’ early efforts to get record labels on board, Apple’s approach to publishers has had mixed results. Even though Apple got some renowned publications on board, it missed out on deals with the Washington Post and New York Times.

In an interview with Reuters Mark Thompson, CEO of the New York Times, explains his reasons for not participating: “We tend to be quite leery about the idea of almost habituating people to find our journalism somewhere else. We’re also generically worried about our journalism being scrambled in a kind of Magimix (blender) with everyone else’s journalism.”

For Apple this is a big loss, because New York Times is the biggest U.S. newspaper, with approximately 4 million subscribers.

There are pros and cons regarding Apple News Plus. Many are convinced that participating is a good idea, but what does participation look like? Are they all in?

Let me give you an example based on the Wall Street Journal.

What does ”participating” really mean?

The publishing industry was more than surprised when the Wall Street Journal (WSJ) stated that they will be part of Apple’s $9.99 monthly bundle.

Why? Because the Wall Street Journal’s annual subscription costs hundreds of dollars – approx. $38.99 per month. How can the Journal profit from this deal?

CNN’s Brian Stelter reported on Twitter that, according to an internal memo, Apple News Plus users would get access to “a curated collection of general interest news.” To access full information users would still need to subscribe to the WSJ.

Amol Sharma, a Journal reporter tweeted that Apple News Plus subscribers will have “access to almost all WSJ articles, but the app will only surface general-interest news“, and that the WSJ seems to expect that most users won’t seek much beyond that.

4. What do magazines look like in Apple News Plus?

For magazines, strong aesthetics are vital, not least the design and artwork. Apple has worked with publishers to bring magazines to life and to create a new experience for the News Plus app.

Magazines like Sport Illustrated and The New Yorker have iPad-friendly designs, spectacular photography, animated covers, well-formatted text and dynamic contents pages. They are a joy to read.

However, magazines like Total Film are only PDF files of the print edition and are okay to read on an iPad, but a real pain on an iPhone.

After Apple’s launch in the US & Canada publishers and readers complained about the buggy and chaotic interface of the News Plus app. They said that magazines are not organised and their sizes do not match. The Verge calls it “messy, but good enough”.

Apple has told publishers that it’s “working on making the product more intuitive for users while addressing publisher-side concerns as well.”  In March 2019, Apple’s Senior Vice President, Eddy Cue said that Apple had “hundreds” of people working to make Apple News Plus better.

One part of the service is what you can actually see. But what happens in the app with readers’ personal data? Does Apple track and sell the data? In the next paragraph I will talk more about tracking.

5. Is there ad tracking with Apple News Plus?

Apple promises that it won’t know what readers read in Apple News Plus, and it won’t allow advertisers to track them. This would be one of the biggest advantages for readers.

“What you read in Apple News will not follow you across the web,” says the company. The subscription is supposed to be the product, not any data collected from readers.

For publishers this approach means that customer data won’t be shared with them. They only will be able to see which content is being read.

Apple explains that as users access content, the app learns what they are interested in, then suggests stories relevant to them. That’s how the service will be personalised to interests of readers.

However Apple claims not to use AI to lead users to fake news. In the next section, I will explain how Apple differentiates itself from other big players like Facebook by using humans to curate news.

6.How is Apple News Plus the opposite of Facebook?

With Apple News, Apple has entered the world of news with a service that is read by 85 million people.

As opposed to Google, Facebook and Twitter who were criticised for their sometimes negative influence over the spread of information, Apple has so far avoided controversy.

One big reason is that while the others rely on algorithms to pick headlines, Apple uses humans. Experts claim that, when it comes to fake news, AI is not up for the job. AI can’t understand fake news, because AI can’t write. So, who can?

Facebook for example uses artificial intelligence to sort through fake news and fact-based information. Apple has gone the other direction with its human-led approach.

Humans pick the app’s top stories, not algorithms. Humans take into account the trustworthiness of a publication and the credibility of a story before pushing it out to the masses.

There is no algorithm leading readers to fake news that has tons of engagement because it inspires fear or outrage.

Apple is convinced it’s found a way to ensure readers avoid fake news in the internet era, while also supporting journalism and democracy. While Apple’s strategy is risky, it might actually be the only right way to do it.

Now, we have examined several different aspects of Apple News Plus. The question that remains is: should publishers participate in the service or not?

7. Should you be in Apple News Plus?

Considering the sheer number of subscribers that Apple New Plus has, it offers publishers access to a huge audience.

If you do it right, you can use the platform to both monetise your content and also drive people to your own platforms. I think it is worth testing the platform without spending too much manual effort.

But there are two things that I would consider:

In case you feel ready to test this new distribution channel, there are several ways to publish to Apple News Plus that I will explain below.

8. How can you publish to Apple News Plus?

As Apple News Plus still needs to prove itself to publishers, it might be wise not to invest too much time and resources in getting started.

With a solution like ours you’ll be able to publish from print to digital. First, your PDFs will be imported to the Purple DS HUB where your content will automatically be mapped to Apple News Plus content blocks. Our workflow is fully automated.

After your articles are transformed within the Purple DS HUB to Apple News Format, you can publish them to Apple News Plus. And also, if you wish, to many further digital channels of your choice.

Learn how you can convert your PDF automatically to Apple News Plus.

As I’ve explained, there are some potential risks and there is a huge potential upside.

It’s not clear yet if Apple’s approach will really help publishers. Only time will tell. On the other hand, the service is likely to help publishers reach a vastly wider audience. Also, Apple is highly motivated to be successful in their subscription-based services as its iPhone hardware business slows down.

As a big brand with a lot of marketing power, Apple News Plus definitely has the potential to become a huge success. Especially because readers want to consume content without ad tracking in a way that respects their privacy.

Effectively, Apple News Plus is webifying the magazine world, and this could be where Apple News Plus finds its true purpose even though the usability of the app is not perfect… yet.

Ready to flip the switch? Start with watching our free Webinar about “How to make the most of Apple News+” here or get in contact with our sales team here. 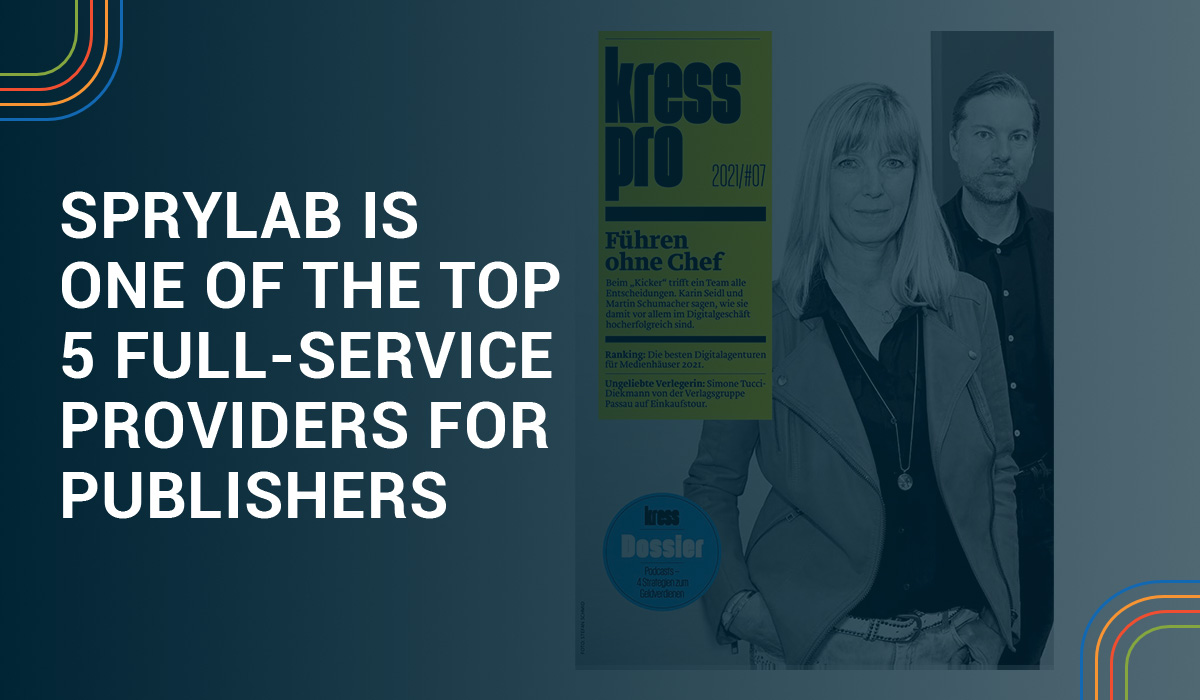